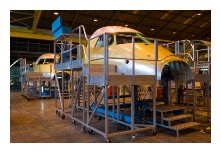 Although Wichita’s aircraft manufacturing industry experienced a significant downturn during the most recent recession, losing 14,600 aerospace product and parts manufacturing employees, the percentage of U.S. general aviation shipments delivered from Wichita has continued to be higher than pre-recession levels.

The percentage of Wichita original equipment manufacturers’ shipments were at 30.1 percent in 2009, with the percentage remaining reasonably stable, between 27 and 29 percent from 2010 through 2013. These percentages surpass pre-recession levels of 17 to 26 percent, in 2004 through 2008.