The Topeka metropolitan area’s* total nonfarm employment grew by 0.3 percent in 2018, adding 300 jobs after the local economy contracted by 800 jobs in 2017. This was a return to the area’s 2011 to 2016 growth pattern, as the area averaged slightly more than 300 jobs annually in that period. The goods producing sectors were the fastest growing in 2018, with the manufacturing sector leading the way with approximately 300 jobs. Unemployment continued its decline in the area for its eighth consecutive year, declining to 3.5 percent, its second-lowest recorded value for the area since 1990. Growth is expected to continue in 2019, adding more than 1,000 jobs, primarily concentrated in the education and health services sector. For 2020, employment is forecast to grow 0.3 percent for the area, with a projected range between 0.6 percent growth and a 0.3 percent decline. The lower-bound range reflects the risk for the local economy due to potential national recessionary concerns. 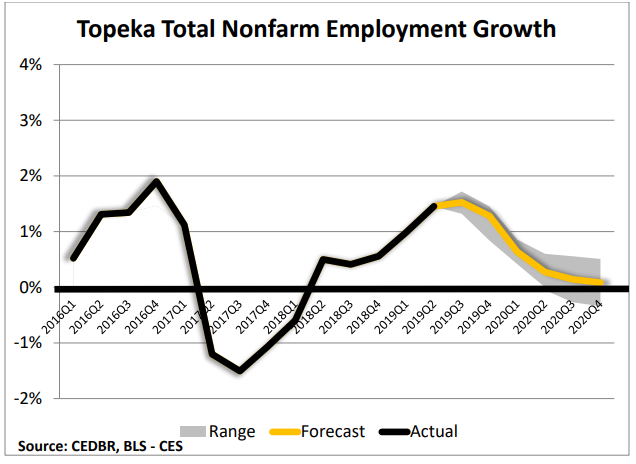