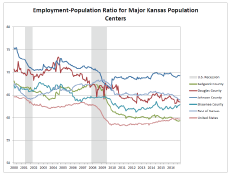 The employment-population ratio is a measure of labor market strength; it is calculated by dividing the number of employed workers in an area by the total civilian non-institutionalized population aged 16 and over in that region. This is often used alongside the unemployment rate in determining the strength of the labor market.