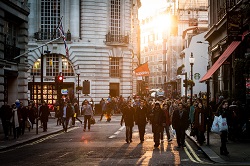 Read the full report on the demographic profile of Wichita unemployment insurance beneficiaries.

Read the full report on the industry and geography profile of Wichita unemployment insurance beneficiaries.